Today’s discussion is with pianist, composer and educator Eric Gould. We discuss the history of non-white composers and he shares his own story as an African-American composer. As a person from a family of composers, Gould is able to give unique perspective to what it means to be a part of orchestral music as a non-white person and educates us on the rich history of composers of color. 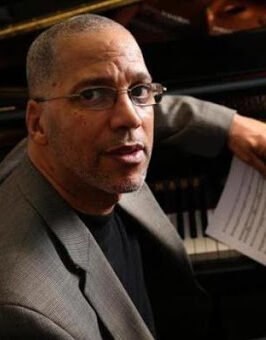 Eric Gould has enjoyed a multifaceted career as a pianist, composer, arranger, and educator. He has performed and recorded in collaboration with world-renowned instrumentalists such as Jimmy Heath, Ron Carter, James Newton, Bobby Watson, Antonio Hart, Winard Harper, Cindy Blackman, Terri Lynne Carrington, Cecil Bridgewater, Robin Eubanks, and Leon Lee Dorsey in addition to leading his own trio in performances from the Midwest to the East Coast. His debut CD, “On the Real”, rose to number 11 on the national jazz radio charts in the first quarter of 1999. His second CD, “Miles Away… Wayne in Heavy” rose to number 10 on the national charts and to number 45 (out of over 2500 releases) for the year 2000 His third CD, “Who Sez?” sold well from coast to coast, and appeared on radio playlists nationally.